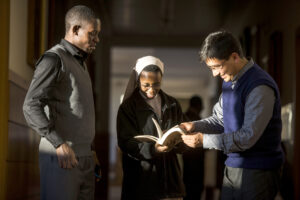 The Faculty is structured in three cycles:

It constitutes an in-depth cycle, divided into two directions:

It is the highest academic degree, aimed at providing advanced tools for scientific research and university teaching. In addition to attending seminars and highly specialized activities, in this cycle students develop a research thesis aimed at producing original results in the philosophical and scientific field.